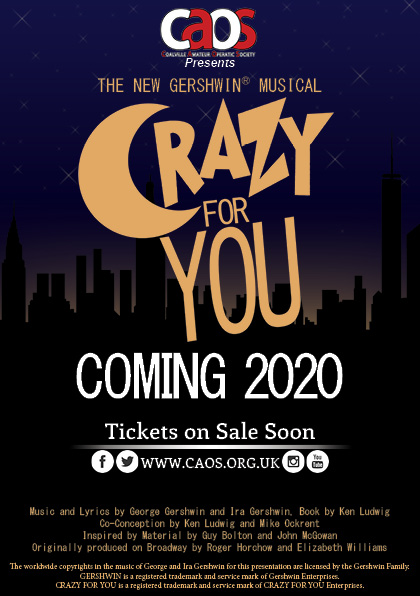 This is the story where all fall in love and a musical within a musical created. Bobby is young man and heir of a wealthy family, which controls a local bank with only a headquarters and no branches, located in New York, discovers his passion for staging the shows. He goes to a local producer, the owner of the theater and tries to impress him with a number of own production (K–ra–zy for You). But this does not happen, and he decides to leave New York to look at the small theater in a small town that his bank wants to take as collateral due to non-payment of the loan, previously received from this bank. When he arrives there, he sees the local beauty Polly and fiery falls in love with her. Polly having insistent boyfriend that she does not like and, at first, she does not feel any emotions for the newly arrived guy.

Bobby wants to put a new spectacular show in the theater, to help keep the theater belong to the previous owner, when he learns that a girl whom he liked is the daughter of the owner and his ex-wife, the star of this cabaret. She likes that idea also, and they together start to develop a new fancy musical. In its participation, were girl-dancers attracted and the local cowboys. Initially, nothing goes so well, especially because of cowboys, who cannot really move on the stage. But then Bobby charges all with his young energy and inspiration in one fiery dance, and now the city is electrified, and all have become more and more responsible for the development of this show. In addition, with the advent in the town of beautiful dancers, everyone are really arose, and the whole city was wake up and electricized by the new energy that went into the town.

Only several persons and no one else came at the opening of the show. Residents gathered to decide what to do with the show. For its continuation, only Bobby and his girlfriend expressed, but not others. He despairs and went back to New York. After 6 weeks, he now works in the office of the bank of his family, but in his soul still belongs to the town and a girl he left. He decides that still loves Polly and eventually takes chances to go after her. She understands the same and decides to go for him simultaneously. They missed quite a bit when he arrives to the town, and she departs to the railway station. But she did not get to it, because a man that agreed to pick her there, ran out of gas and she missed her train to NY City. Returning back, she captures Bobby in the city and they are happily reunited. Bobby’s mother, who came along with him, responsively falls in love with a local handsome man, and ex-girlfriend of Bobby, who kept pulling him to New York after her, marries the same producer of the show, to which Bobby sang his song at the beginning.